Automatically segment the boundary of a nucleus or cell starting from an approximate ROI. It supports 2D and 3D processing (requires a 3D starter ROI) and tracking of slowly moving cells. Ideal to study cell morphodynamics.

This book chapter proposes a step-by-step tutorial for the Active Contours plugin with video tutorials (see tutorial 3 to 5). Images used in the tutorial are available on this Zenodo repository.

This page describes the “Active Contours” plug-in, a segmentation technique able to extract the outline of objects in 2D or 3D images, and also track these outlines over time in a 2D or 3D time-lapse sequence. In a nutshell, an initial contour is drawn (or generated) around an object of interest – note that the initial contour need to be in 3D if we want to do 3D processing – and will then snap on the object’s border automatically. In a tracking scenario, the final object border is taken as the initial position to segment the following frame, and so forth (NB: tracking applications therefore require a good time resolution during acquisition, such that an overlap exist between successive positions of the tracked object)

This documentation starts with a pseudo-exhaustive (partly historical) description of the method, its principle and its numerous implementations, before actually presenting the Icy plug-in in more details, including the choice of implementation and the available parameters.

If you are familiar with the approach, you may skip directly to the “Plug-in description” section, otherwise you are invited to read on (NB: the introduction is definitely more technical than I would hope, but this should be a good starting point to anyone interested in the underlying idea).

If you use this plug-in in your work, please cite the following reference: “Dufour et al., IEEE Transactions on Image Processing, 2011” (Note that this reference describes the 3D version of the algorithm, but the 2D version works exactly the same).

The principle of deformable models is to define an initial curve (2D or 3D, opened or closed) in the vicinity of an object of interest, and let this curve deform until it reaches a steady-state when it fits the boundary of the target. Although this looks like black magic at times, there are sound underlying mathematics involved. The curve and its deformation can be expressed in many different ways, which I describe below.

Curve representations are presented here in (more or less) chronological order (rather than by group) to give a coherent view of the evolution in the field over the last decades. This review is however not exhaustive and only gives the main lines of research for the general reader, directed toward the purpose of the plug-in (cell segmentation and tracking).

Once the contour representation is fixed, one must choose a mathematical framework to actually drive the deformation of the curve from its initial position toward the boundary of the object of interest. Here again, several solutions are available, the most popular ones cited below in arbitrary order.

This plug-in implements Multiple Coupled Active Contours in 2D and 3D, according to an energy-minimizing framework with a discrete explicit representation of the contours (polygons in 2D, and triangular meshes in 3D, both with self-parametrisation and topology control). If you have no idea what this last sentence means, you probably have skipped the explanation above (and if you couldn’t understand the description above, the take-home message is: it works in 2D & 3D, tracks objects over time, handles multiple contours simultaneously, detects divisions, and is pretty damn fast!)

The contour evolution exploits multiple cues to achieve optimal segmentation (both based on the image and on semantic information). Just like you would perfect a cooking receipe by adjusting the nature and quantity of ingredients, the best segmentation is achieved by a careful adjustment of the various components, which are detailed below (and correspond to the plug-in parameters):

Other sources of information (less fundamental, but still useful):

Finally, the evolution of the contour itself (i.e. the minimisation of the underlying mathematical functional) also has its set of parameters which can be adjusted. These have more to do with the total execution speed of the segmentation / tracking process, here again with pros & cons:

1) Open an image or video sequence

2) Draw one (or more) region(s) of interest around or across the object(s) of interest. Draw a 3D ROI for 3D processing. You may also generate one or more ROI automatically using other plug-ins such as the “Thresholder” or the “HK-Means”, which is a good step towards full automation of the workflow (and is the preferred way of initialising the method in 3D, until a good 3D ROI editor is implemented in Icy).

3) Adjust the various parameters of the method (see the explanation above, and the example below)

4) Select the desired output (none, labeled sequence, copy of original sequence with detected objects as ROI)

5) For tracking: first leave the tracking option unchecked; adjust the parameters on the first image; only then check the “tracking” option to process the entire sequence.

6) To access advanced parameters, check the corresponding box and the interface will update automatically.

To run this example, you may download the following video sequence of a moving cell via this link (you may want to right-click and save it on your disk).

Open the active contours plug-in, follow the instructions above, and refer to the screenshot below for the parameters. If all goes well, you should obtain the exact same results as shown below.

Note that a small tooltip message will appear under the mouse as you hover each parameter, indicating how to adjust the parameters for each scenario. 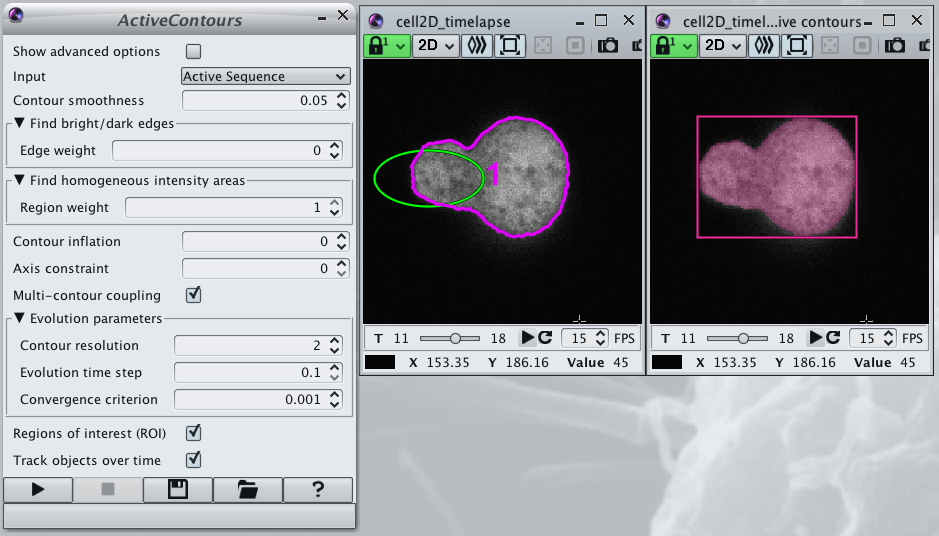