Automatically segment the boundary of a nucleus or cell starting from an approximate ROI. It supports 2D and 3D processing and tracking of slowly moving cells. Ideal to study cell morphodynamics.

This book chapter proposes a step-by-step tutorial for the Active Contours plugin with video tutorials (see tutorial 3 to 5). Images used in the tutorial are available on this Zenodo repository.

If you use this plugin in your work, please cite the following reference: “Dufour et al., IEEE Transactions on Image Processing, 2011”. This reference describes the 3D version of the algorithm, but the 2D version works exactly the same.

The “Active Contours” plugin is a segmentation and tracking tool that is able to extract the outline of objects in 2D or 3D images and track these outlines over time in a 2D or 3D time-lapse sequence. In a nutshell, an initial contour is drawn (or generated) around an object of interest and then snapped on the object’s border automatically. In a tracking scenario, the final object border is taken as the initial position to segment the following frame, and so forth. Note that the initial contour need to be in 3D to do 3D processing. Note also that tracking use cases require a good time resolution, such that an overlap exists between successive positions of the tracked object.

This documentation is divided in 3 main parts: it begins with a short step-by-step guide and an example to get quickly started. Then, it continues with a description of the plugin parameters, including the choice of implementation and the available parameters. The last part contains explanations about the method, its principle and its numerous implementations and is worth reading to get an in-depth understanding of the plugin. 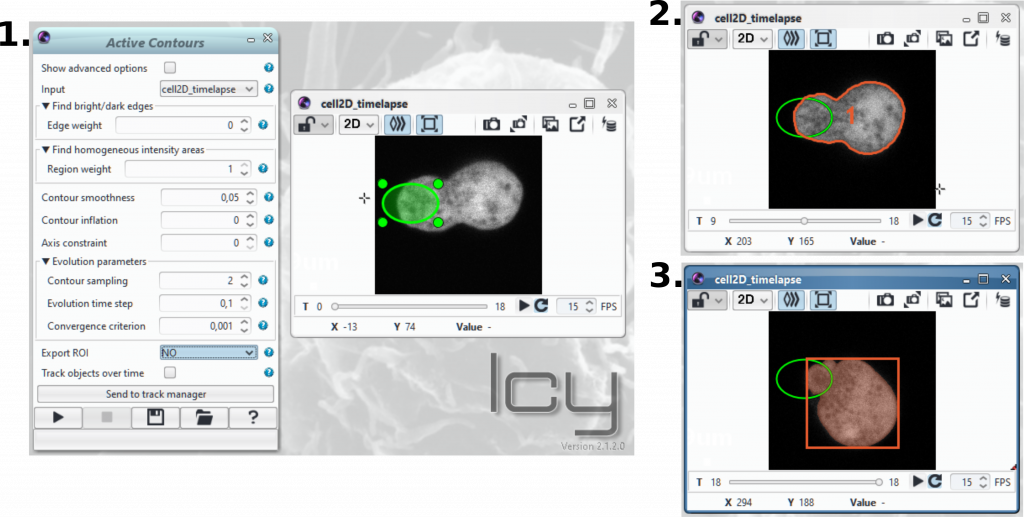 1) Open an image or video sequence

2) Draw one (or more) region(s) of interest around or across the object(s) of interest. Draw a 3D ROI for 3D processing. You can generate one or more ROI automatically using other plugins such as the “Thresholder” or the “HK-Means”. This should be the preferred way of initialising the method in 3D, until a good 3D ROI editor is implemented in Icy. And this is a good step towards full automation of the workflow.

3) Adjust the various parameters of the method (see the example and explanations below). A small tooltip message will appear under the mouse as you hover each parameter, indicating how to adjust the parameters for each scenario.

4) Select the desired output (no output, export of ROIs on input image, copy of original sequence with detected objects as ROI or labeled sequence)

5) For tracking: first leave the tracking option unchecked; adjust the parameters on the first image; only then check the “tracking” option to process the entire sequence.

6) To display the advanced parameters, check “Show advanced options” at the top of the plugin window

Example of segmentation and tracking of an amoeba

To run this example, download the following video sequence of a moving cell (cell_bleach.tif) and open it in Icy.

Some parameters are visible only when ticking “Track objects over time” or “Show advanced options”. 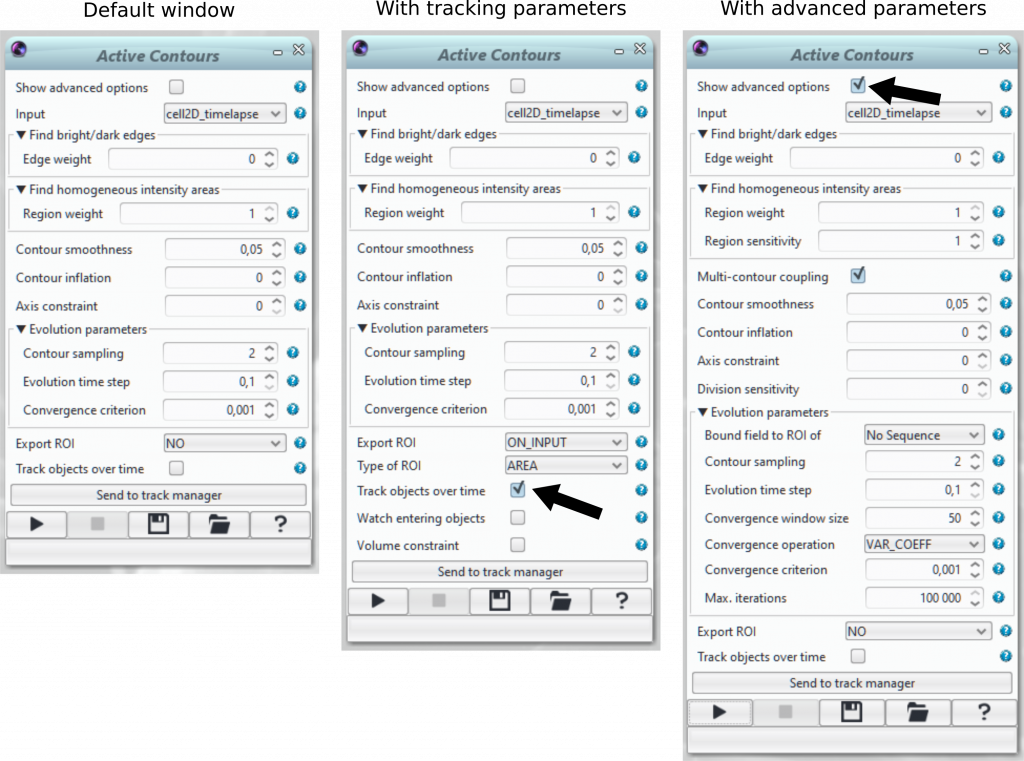 Note also that the Active Contours plugin has a block counterpart. 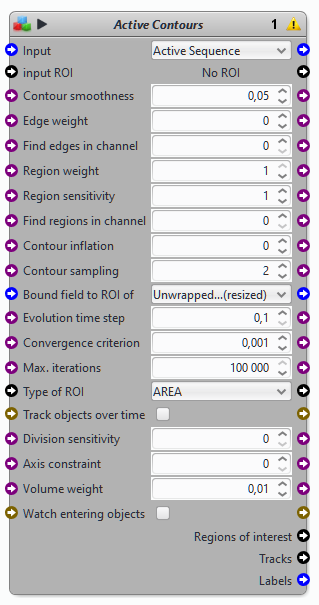 This plugin implements Multiple Coupled Active Contours in 2D and 3D, according to an energy-minimizing framework with a discrete explicit representation of the contours (polygons in 2D, and triangular meshes in 3D, both with self-parametrisation and topology control). In a nutshell: this plugin works in 2D & 3D, tracks objects over time, handles multiple contours simultaneously, detects divisions, and is pretty damn fast! For more details, read the Method section below.

The contour evolution exploits multiple cues to achieve optimal segmentation (both based on the image and on semantic information). Just like you would improve a cooking recipe by adjusting the nature and quantity of ingredients, the best segmentation is achieved by carefully adjusting the different parameters.

The most important parameters are the Edge weight and Region weigth. Many markers used in microscopy are specific to membrane structures ie “edges”. Edges can also be present without specific markers, in phase contrast microscopy images for instance. The contour can exploit this edge information to “look” for bright (or dark) edges of a structure, and stop when these structures are reached. The caveat here is that the contour must be already close to its target in order to “snap” to the border correctly (otherwise the contour won’t “see” it). Other types of fluorescent markers highlight non-membrane structures such as the cytoplasm, the nucleus, or other organelles, and delineate regions. Region-based information is a very powerful asset for segmentation and tracking. The Active contours plugin exploits the Mumford-Shah functional to estimate the optimal frontier that segments the regions of interest by maximising the difference between their average intensity and that of the background. Here this also works with multiple regions that do not share the same average intensity (convenient if the staining is not constant from cell to cell). The advantage here is that the contour does not need to be very close to the target to segment it (although being close makes the whole process faster!), and there is no need to have “sharp” edges to find the boundary.

Finally, the evolution of the contour itself (i.e. the minimization of the underlying mathematical functional) also has its set of parameters which can be adjusted. These have more to do with the total execution speed of the segmentation / tracking process, here again with pros & cons:

When contours evolution is done, the plugin can export the results in different format depending what suit better.

The principle of deformable models is to define an initial curve (2D or 3D, opened or closed) in the vicinity of an object of interest, and let this curve deform until it reaches a steady-state when it fits the boundary of the target. Although this looks like black magic at times, there are sound underlying mathematics involved. The curve and its deformation can be expressed in many different ways, which I describe below.

Curve representations are presented here in (more or less) chronological order (rather than by group) to give a coherent view of the evolution in the field over the last decades. This review is however not exhaustive and only gives the main lines of research for the general reader, directed toward the purpose of the plugin (cell segmentation and tracking).

Once the contour representation is fixed, one must choose a mathematical framework to actually drive the deformation of the curve from its initial position toward the boundary of the object of interest. Here again, several solutions are available, the most popular ones cited below in arbitrary order.