NB: This protocol takes as input a 3D sequence, for instance cropped with P1 protocol, and the name of the dataset. It outputs a text file with the name of the dataset containing SNR, CI and CIV measurements and screenshot images slice by slice of the original image with the quadrant layer superposed on top. Large sequences may take a long time to process, prefer cropped sequences.

The information below regarding the calculation of the SNR, CI and CIV come from the Supplementary Note 3: Image analysis framework of Andilla et al. 2017.

The SNR is obtained as a ratio between the dynamic range of sequence, which measures the gap between the brightest objects and the darkest areas in a 3D image in terms of intensity, and the standard deviation of the noise present in the 3D image. These two quantities are evaluated as follows:

– The method proposed to evaluate the standard deviation of the noise follows anapproach proposed by Starck & Bijaoui, Image processing and data analysis. Cambridge University Press (1998), which consists of (i) computing a low-pass filtered version of the 3D image by applying an isotropic Gaussian kernel with a standard deviation parameter set at 1.5 pixels, (ii) subtracting this low-pass filtered 3D image from the original one to extract its high-frequency content,which corresponds mostly to noisy data. The standard deviation of this residual is then evaluated through a rank estimator. It is important to note that the low-pass filtered version of the 3D image involved in this computation should not beunderstood as a denoised version of the input: in particular, the Gaussian kernelmay introduce significant artifacts close to the object edges in the image. However, in homogeneous areas, the Gaussian kernel is efficient in separating thenoise from the signal of interest.With this definition, the SNR measure is invariant with respect to linear contrast transformations.

To determine CIV, xz cross-sectional images are used as an indication of the apparent penetration depth of the imaging systems. The CIV is then estimated in 3 steps: (i) the equator volume of the TM is extracted from the 3D contrast map coplanar with both illumination and imaging axes, with a thickness equaling 20% of the TM; (ii) The extracted volume is projected into a 2D image using Maximum Intensity Projection (MIP); (iii) Finally, quadrants are delineated on the MIP, and the percentage of area displaying more than 5-20% of local contrast in each quadrant is measured.

Please cite Andilla et al. 2017 if you re-use this protocol or make a modified version of it. Figure below comes from the supplementals of Andilla et al., 2017. The protocol described here is the protocol P2. The protocol P1 detects tissue mimics imaged with a light-sheet microscope and crops 3D sub-volume and should be used prior to P2. 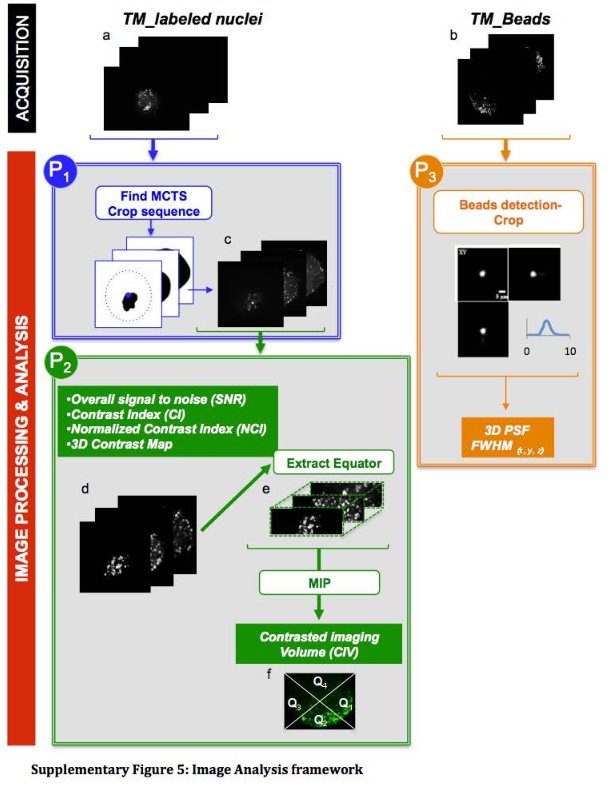